The Cougar Volunteer Spirit is Alive and Well in Charleston

This blog is a project by public relations students at the College of Charleston. Since its inception in 2004, the Cougar Volunteer Spirit has showcased dozens of students who give of their time, effort and hearts to helping those in need. They don't do it for recognition like this, but their stories need to be shared because of their admirable qualities of character and caring. "Be the change you want to see in the world," Mahatma Ghandi said. That's the Cougar Volunteer Spirit that roars through these pages. Click on the side photos to see the articles. See photos of the students who wrote the pieces at the end. Thanks!

"Just Do It!"
by Laura Van Ingen 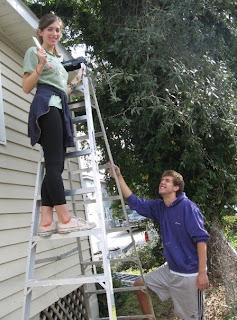 Craig Budde helps secure the ladder while
fellow Habitat for Humanity friend paints a house.
The first thing I noticed about Craig was his curly hair. The second, was his laid back, soft-spoken personality. Once I began talking to him, I noticed how driven he is.
Craig is not only a junior with a double major in theory and composition as well as arts management; he is also the president of CofC's Habitat for Humanity chapter.
He started volunteering at a church in his hometown of Shushan, N.Y., when he was very young and has continued to help others ever since.
Currently, as president of Habitat for Humanity, he builds houses for families for underprivileged families. The family must still purchase the house once it is built, however, it is significantly cheaper. Recently, Craig built a house in downtown Charleston on Lee Street.
About Craig Budde...
Hometown: Shushan, N.Y.
Major: Theory and Composition
& Arts management
Expected graduation: spring 2012
Volunteer Activities: When I was younger I volunteered at a church in Shushan and worked at a homeless shelter in New York City. Right now I am volunteering at Habitat for Humanity.
What do you enjoy most about community service: I love the feeling that helping others gives me. I know I am devoting my time in a positive way and hopefully making a difference in their lives.
How do you think your friends and family would describe you? Laid back, smart, very active.
What would you tell someone who is thinking about volunteering? Do it! It makes a difference. I hate when kids sit on their couches all day watching TV when they could be doing something productive. It's so frustrating to me.
What have been your most memorable experiences? My most memorable experience would be the 30 hour famine I participated in to raise money. Instead of dancing for 30 hours, (like a dance marathon), I didn't eat for 30 hours. I did it when I was younger which made it especially hard because I used to eat so much.
What are your plans after graduation? I have no idea. Probably something with art. I might try to work for the theater company that my older brother founded.
To learn more about CofC's Habitat for Humanity program go to this website: habitat.clubs.cofc.edu
About the Writer
Laura Van Ingen is to graduate in May 2011 with a bachelor's degree in communication (media studies).
Posted by Laura Van Ingen at 10:25 AM 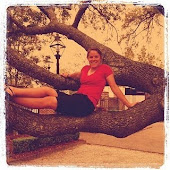 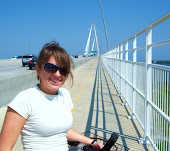